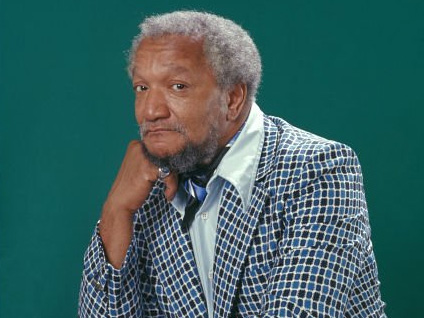 John Elroy Sanford was an American stand-up comedian and actor who attained a lot of fame during his heydays. He is popularly known by his stage name ‘Redd Foxx,’. Read this to know comedian Redd Foxx net worth.

Foxx gained global popularity through the hit television series Sanford and Son, where he was the lead character. He played the role of ‘Fred G. Sanford’ from 1971 to 1977 and proceeded to star in the ‘Sanford’ TV show from 1980 to 1981.

Redd’s raw talent earned him a Golden Globe Award for Best TV Actor in the Musical/Comedy series ‘Sanford and Son.’

Find out more intriguing facts regarding Redd Foxx in this review.

Who was Redd Foxx?

He grew up in Chicago’s South Side, with his mother as the only parent. Redd’s dad, Fred Sanford, took off when his son was only four years old, leaving Foxx under the care of his mother, Mary Hughes.

His comedy career kicked off after he adopted and developed a crude nightclub act in the 1950s and 1960s. Redd caught his big break when singer Diner Washington practically begged him to accompany her to Los Angeles after watching one of his performances.

While in LA, Foxx managed to impress Dootsie Williams of Dootone records. Soon after, he achieved a feat by becoming one of the first African-American comics to perform to white folk on the Las Vegas Strip, thanks to his long-term contract with Dootone records.

Redd excelled in the comedic industry, appearing in over 50 records in his lifetime. He was additionally named the ‘King of the Party records’ as a tribute to his phenomenal comic albums.

Moreover, in 2004 Comedy Central ranked him as number 24 in the list for ‘100 Greatest Stand-ups of All Time’.

Foxx branched out his talents and delved into acting in the 70s. He was able to land roles in films and TV shows such as ‘The Royal Family,’ ‘All the Fine Young Cannibals’ and ‘Harlem Nights.’

Decades of gracing his audience with hilarious content did not go without merit. Foxx was presented with two ‘Image Awards’ and was nominated for three ‘Primetime Emmy Awards.’

Furthermore, Redd was given a star on the St. Louis Walk of Fame in 1992. At the age of 68, Foxx passed away on account of a heart attack. He died on the set of ‘The Royal Family.’ October 11th, 1991, was a grim date for his loved ones and fans.

Foxx weaved a lucrative career in the entertainment scene, booking a plethora of acting and stand-up acts. He, unfortunately, was not able to keep his wealth because of poor lifestyle habits. Additionally, Redd never paid taxes on time.

His multiple divorces also contributed to his diminishing resources. While he was waiting for his divorce from his second wife, Betty Jean, Foxx had to part with $150,000 as directed by the court.

The same scenario repeated itself when he was divorcing his third wife, Joi Yun Chi Chong. He paid $2,500 per month to his ex-wife as instructed by the court. For the divorce settlement, Redd relieved $300,000 to Chong.

By 1983, Foxx was bankrupt. The IRS proceeded to freeze his assets at the time, which included; his Las Vegas residence, vehicles, money, guns, and a semi-automatic pistol.

At the time of his death, Redd owed over $3.5 million in taxes. Due to his bankruptcy, Foxx’s funeral had to be financed by an outside party. Eddie Murphy, Redd’s long-term friend, covered all the funeral expenses.